A vacant home was broken into twice on Spring Bud Ct. The property manager as well as the police were notified. It was vacant and nothing was stolen.
A garage on Winterhaven Road was broken into and several items stolen; a police report was filed
Please keep a watchful eye on your property as well as your neighbors. Report any suspicious persons or activity to the police.  Outdoor lighting is one of the best tools we have to help prevent this type of crime. Security cameras have come down so much in price they may be something you want to consider.
As always, remember to keep your doors locked and dead-bolted, as well as cars locked each night.  Be safe out there!

A neighbor in the 2700 block of Summerfield Drive reported to me that last night her husband accidentally left one of their vehicles unlocked and someone took everything out of the truck. Luckily there was nothing very important or valuable inside but the thief had to walk all the way up their driveway. The motion-sensing lights did not deter the individual.

Please make sure your vehicles are locked and valuables are removed. Report any suspicious or criminal activity to the police.

Two 18-year-olds have been arrested today for the recent Four Seasons and Breckenridge Estates burglaries. One of the families burglarized has reported to me that police detectives told them their flat screen TV has been found at a pawn shop. One of the suspects was living with his grandparents in the Four Seasons neighborhood near to our FSNA President!

Exactly two weeks ago we had two homes in the neighborhood (on Chimney Rock Ln and Winterhaven Rd) burglarized while the homeowners slept upstairs. In one case a screen was cut on an open window and the other a door lock was shimmied open (the deadbolt was not engaged). Items taken were a big screen TV, iPads, camera and credit cards. So far it appears the theives get in and get out quickly grabbing whatever is close to their entry point.

Now we’ve had a third home broken into overnight last night. It was between midnight and 5 AM on the dead-end portion of Summerfield Dr, another two-story home. This makes three break-ins in two weeks. As before, the homeowners were sleeping at home at the time. They took a flat screen TV and 3 bottles of expensive bourbon sitting on the counter. The mother who lives with them was in the bedroom downstairs at the time.

Please remind your neighbors to be especially watchful if they get up at night.  Make sure your doors are securely locked and deadbolted.  Keep outside lights on all night.  Lock cars parked outside and don’t leave valuables or garage door openers in them.

If you haven’t seen it on the news we just wanted to let everyone know there was an arson fire on Weather Way last night in the Four Seasons neighborhood, the arsonist also hit Silver Springs and Four Seasons Apartments. The residents on Weather Way were awake at the time (1:00 AM) and able to escape without injury. The damage was limited to the front porch, but the fire department tells us had it been another couple of minutes before they arrived the fire would have spread to the roof and more serious damage would have occurred. Both McMahon and J-Town Fire Departments responded to the call.
The fire department also advises to remove outside wreaths, (or place them between your front door and storm door), also any flags or anything that might be tempting to an arsonist, and keep your front porch lights on. If you are up late look outside for anyone or anything suspicious. If you see anything please report to Pat Walsh McMahon Fire Dept. 817-0540 or the Metro Police at 574-LMPD. Pat Walsh attended our last General Meeting and we plan on having him come again soon.
http://www.wlky.com/news/arson-investigation-underway-after-2-fires-set-in-hikes-point-area/25067200

A neighbor on Summerfield Drive experienced arson last night (Sept. 5/6). In their words:

“We had an arson fire last night. Someone set the UL flag hanging on our front porch on fire around 2:30 a.m. No one was hurt, but neighbors need to be aware.”

We just received this from the Breckenridge Estates Neighborhood Association (BENA) Blockwatch.   It was sent from LMPD…..
With schools letting out and a lot of end of year activities please watch out for this man.
Posted on Parkway Village Face book page –
Attention Louisville Parents: Pedophile/Pervert alert.  65+ white male, very tan & white hair, balding, small build.  Missing tooth on right side of smile.  Drives a white Chevy convertible with black top.  License #716 CER.  I am reporting him to Louisville Metro Police & the Parks department.  Twice I have seen him driving around playgrounds and calling out to children to approach his car.  The first time I couldn’t get his license.  This time I spoke with him & told him I was calling the police.  He cruises the playgrounds at public parks.  PLEASE SHARE.
Celeste Fautz
GRCP Neighborhood Watch “CARING NEIGHBORS WORKING TOGETHER TO MAKE A GREAT NEIGHBORHOOD GREATER!”

We have reports that Rainview Circle has had several auto break-ins recently.  A Blazer had the passenger side air vent broken out.  And thieves got into a sports car and tore out the electronics from the dash board.

Please keep a look out for strangers and secure your automobiles.  If you have valuable electronics in your car, it’s advised that you park it in a locked garage.

If you have block-watch related news you’d like to share with your Four Seasons neighbors, email them to Jim Patterson at jlpatters77 at yahoo dot com. 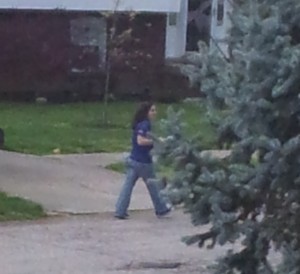 If you have any updates regarding this woman that other neighbors may want to know, please send them to Jim Patterson (jlpatters77 at yahoo dot com).  He will update this notice accordingly.  We have not yet heard of any further burglaries nearby.  If you know otherwise, please share.  Thanks!
UPDATE (5/6/2013): Police have been called on numerous occasions.  I’m not sure we need to continue to call.  Just please beware – do not share personal information or let her into your home.  She has recently been spotted with another woman accompanying her.
The woman has been questioned by police and apparently has a legitimate City of Louisville license needed to make house-to-house calls.  Police also indicated to a neighbor that someone had been caught for the Bradford Grove break-in and robbery (although the person that was burglarized had not heard this information from police).
A few suspicious oddities:

She may be totally innocent, or passing information on to others… we can never know.  One thing is for sure, her timing for going door-to-door in this neighborhood is horrible considering recent burglaries and arson nearby.

BEWARE and never reveal personal information, your schedule, or information about your home security to strangers that show up at your door . . . . and DON’T let them enter your home!!
=======================
Previously reported in this post:
During the last part of April and into May a young college age girl (full dark brown hair past the shoulders typically wearing a blue shirt, blue jeans and carrying a clipboard) is walking the Four Seasons, Breckenridge Estates and Bradford Grove neighborhoods, making notes on her clipboard, and occasionally ringing door bells to ostensibly sell a security system.  (Photo of the young woman is attached to this post)  She appears very friendly, smiling and waving as you drive by her on the road. Many neighbors have seen her.
A neighbor in Bradford Grove let this woman in her house to use the bathroom and a few days later (on Saturday, April 26) her home was burglarized.  Upon seeing the attached photo, the neighbor confirmed it was the same girl and reported the following:
“The young woman I let in to go to the bathroom works for Guardian Security. There is no such company.The local phone number listed has been disconnected. I called The Better Business Bureau and they gave me another number. That number turned out to be for China One. I called the police and gave them that info and an updated list of missing items. The detective called me back and said that young lady was checking to see if my house was worth breaking into and made a phone call to let someone know it was. Please learn from my stupid mistakes. Always lock your storm door, too, and NEVER let anyone- even young polite young women- in your house.”